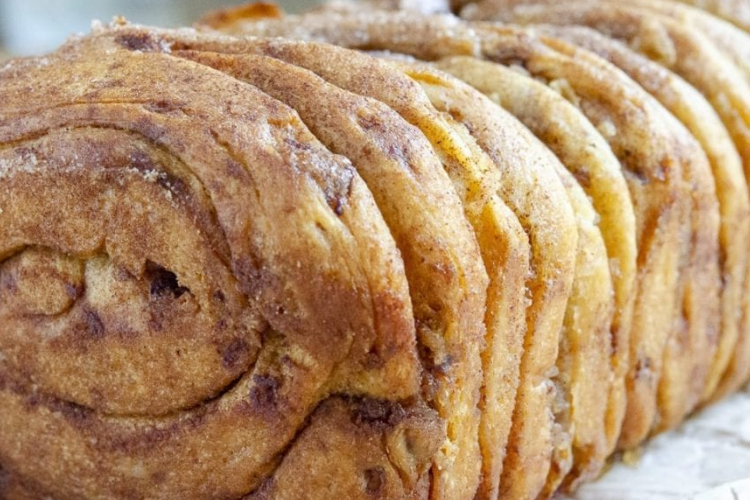 With one little box of an apple fritter, it is like a celebration of fall. A soft, doughy delight packed with tender spiced apples and beautifully fried, and don’t miss the azure glaze coating it. Well, we have an option for you to hit all those same notes, but it’s much easier to share and make at home – Apple Fritter Pull-Apart Bread. There’s no frying to worry about, and it’s a bread with no yeasted dough to tend to since it uses the shortcut of refrigerated cinnamon roll dough.

Preheat oven at about 350 ° F. In a portion dish, oil with margarine or non-stick spray. Put them in a safe place.

Cut the icing and cinnamon rolls from the package. Dispose of icing or place in a dry position for a later application.

Take each cinnamon roll and extend it out until it turned out to be flat like a hotcake and scatter it over a paper-lined surface of stuff.

Whisk the spread and vanilla together in a tiny bowl before they merge. Layer the margarine blend evenly over each smooth cinnamon roll and finish with ground apples afterward.

Combine sugar and cinnamon in a separate dish, and scatter over the apples.

Place cinnamon into 3 or 4 sheets. Once all rolls are stacked, shift each stack to the portion platter and position them at the end so that no apple filling touches the portions of the deal.

Cover with foil for 35 minutes. So cut the foil and bake for another 15-20 minutes.

Move from skillet to a wire rack and allow to cool for 10 minutes before you remove it from the skillet.

As portion cools, blend powdered sugar in 1 to 3 tbsp of milk or cream until you reach the desired consistency.